With a 400-million-strong user base, Twitter is one of the most popular social media networks in the world.

The United States alone has around 73 million Twitter users.

The core of its popularity lies in the fact that people can engage with highly influential people online.

What goal do you intend to achieve with the Twitter ads campaign?

That is your campaign objective.

You may choose any of the following campaign objectives:

Therefore, we’re going to hit ‘Next’ to proceed.

To fund our Twitter ad campaign, we need to add a payment method first.

Go ahead and add a payment method.

Note that, you won’t be charged anything until your Twitter ad is live and running.

It’s time to add the campaign details for our Twitter ad campaign.

Type in the name of your campaign.

We want people to click our ads and visit a booking page on our website where they can schedule a consultation call for understanding the strategy.

The process of creating a Twitter ad is quite similar to that of a TikTok ad and a Facebook ad.

Once you’ve named your campaign:

Read more: How to Advertise on TikTok

Within each ad campaign, you can add multiple add groups.

Let’s say, you want to test three types of audiences in a single campaign.

This will help you determine the top-performing ad group in your campaign.

With that knowledge, you can now start adding your ad group details:

Since we’re only creating one ad group, we don’t need to set a total ad group budget.

But if we were to create four ad groups, we could evenly distribute the $100-total-campaign-budget with $25 for each group.

At the end of the campaign, you’ll find out which ad group performed the best because you had the same budget allocated across all your ad groups.

Next, you can select the start and end date by clicking ‘Specify time’.

However, you don’t need to if you’re only creating a single ad group.

Now, proceed with the following actions:

Next, we have ‘Demographics’, which is all about audience targeting (refer to the screengrab).

So, when would you actually target specific operating systems?

But your app is only designed for iOS.

In that case, selecting iOS as the operating system makes sense.

Below ‘Devices’, we have a ‘Custom audiences’ section.

However, we haven’t created any custom audiences. Hence, we’ll skip this for now.

Below ‘Custom audiences’, we have the ‘Targeting features’ section.

Here, you want to:

Under additional options, you can:

We’ll pick the second option and move the bar to ‘Defined’ (refer to the screengrab).

It means that we’re targeting look-alikes that most closely match our audience.

If you also select ‘Expanded’, Twitter will show your ad to people who somewhat match your target audience’s features.

Ideally, you should have at least three ad groups.

You’ll see a toggle in this section.

It’s recommended to turn it on.

This allows you to reach your audience across different apps.

Moreover, as a beginner, you want to keep all the formats selected:

Next, you need to pick categories that best describe your ad content.

For this Twitter ads guide, we’ll pick ‘Business’ and ‘Marketing’.

This brings us to the next step of our Twitter ads tutorial. 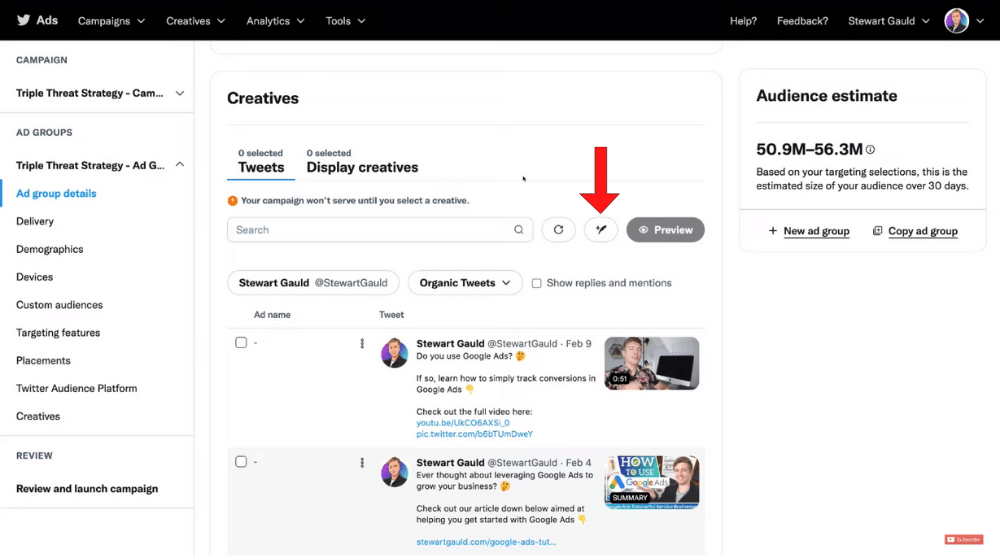 This is where you create the actual ad.

We will recreate an older Tweet on the Triple Threat Strategy and this time include a link to our website.

Lastly, take the time to review the ad campaign as well as the ad group details.

By clicking ‘New ad group’, you can also create an additional group.

Alternatively, you may copy the current group and change the targeting features to create another ad group quickly and easily (If you’re creating multiple ad groups, it is best practice to only change one targeting option so that you can easily measure and qualify the differences between each group).

After reviewing the campaign, hit ‘Launch Campaign’ at the bottom.

That’s going to take you to the Twitter ads manager, where you can see this new campaign.

Moreover, you’ll find other details, such as:

That wraps up everything we wanted to cover in this beginner’s Twitter ads guide.

Check out our full Twitter Ads video tutorial down below to help you get started.

I have a strong passion for digital marketing, media and small business strategy, I'm a lover of travel, freediving and spicy food!

Join us to receive actionable tips, tutorials and tools to grow your small business online

This website uses cookies to improve your experience while you navigate through the website. Out of these, the cookies that are categorized as necessary are stored on your browser as they are essential for the working of basic functionalities of the website. We also use third-party cookies that help us analyze and understand how you use this website. These cookies will be stored in your browser only with your consent. You also have the option to opt-out of these cookies. But opting out of some of these cookies may affect your browsing experience.
Necessary Always Enabled
Necessary cookies are absolutely essential for the website to function properly. These cookies ensure basic functionalities and security features of the website, anonymously.
Functional
Functional cookies help to perform certain functionalities like sharing the content of the website on social media platforms, collect feedbacks, and other third-party features.
Performance
Performance cookies are used to understand and analyze the key performance indexes of the website which helps in delivering a better user experience for the visitors.
Analytics
Analytical cookies are used to understand how visitors interact with the website. These cookies help provide information on metrics the number of visitors, bounce rate, traffic source, etc.
Advertisement
Advertisement cookies are used to provide visitors with relevant ads and marketing campaigns. These cookies track visitors across websites and collect information to provide customized ads.
Others
Other uncategorized cookies are those that are being analyzed and have not been classified into a category as yet.
SAVE & ACCEPT